Kylian Mbappé and the enduring appeal of Real Madrid 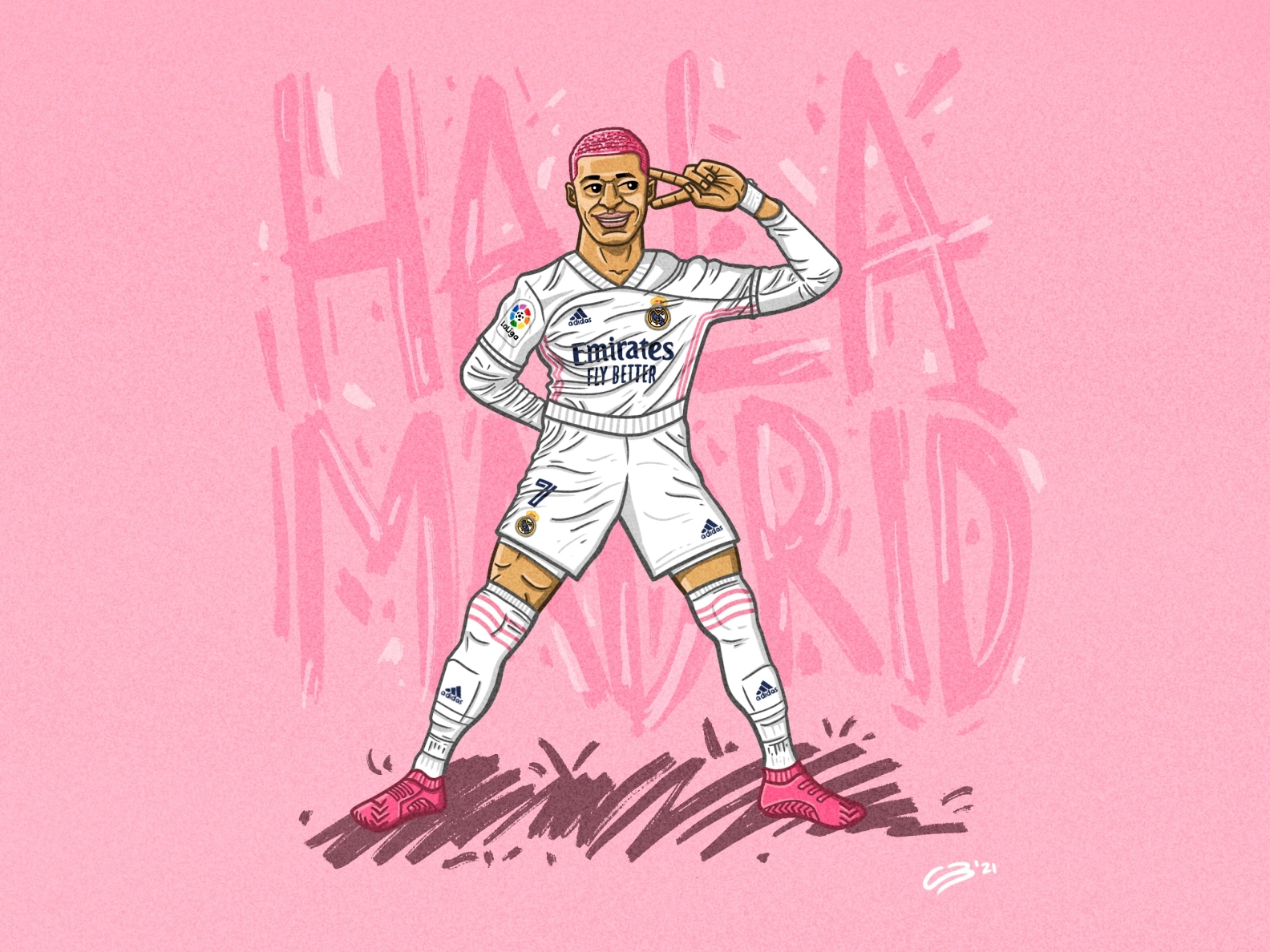 All roads, as the frequently appropriated quotation goes, lead to Rome. In the ancient world, when Rome stood as the center of western civilization and the seat of power, it was there that men went to measure themselves, to win honor and fame, to achieve immortality. In the career of the modern-day footballer the path to superstardom, to greatness, to footballing nirvana, leads to Real Madrid. In the long history of European football Real Madrid towers over the continent, a vast monolith of brilliant white and gold, its grandeur casting a long shadow over all other pretenders to the throne. Only Real Madrid can be kings of Europe, no one else. ¡Viva Los Reyes!

Twasever thus. Beginning in 1956, Real Madrid won the European Cup 5 times in a row, the greatness of Ferenc Puskás and Alfredo Di Stéfano sparking what would grow to become an obsession for la Madridistas. The culmination of this great side, their 7-3 devastation of Eintracht Frankfurt in the 1960 European Cup final, exemplified and codified the aura and arrogance (in the best possible terms of course), of Los Blancos, the idea that all other football clubs, all other expressions of the game, were but flies to be swatted, mere speed bumps in the path of the unstoppable force of Spanish greatness. This of course is to say nothing of adoption and weaponization of Real Madrid as a force for Spanish nationalism under General Franco, the details of which are distressing, and deserving of exploration on their own terms. After their 5th title in 1960, Real Madrid became the first club to be awarded the trophy on a permanent basis, and, with their recapture of the title in 1966, they cemented their relationship with a trophy that no other club has matched since.

However, as Real Madrid would come to define the European Cup, so too would the European Cup would also come to define Real Madrid. For a club that has won a record 34 La Liga titles, such paltry accolades can often be regarded as mere window dressing; the managers who claim them disappointments and failures. With the hegemony that has emerged at the top of European football, the almost pathological desire to claim the Champions League that was once the hallmark of Real Madrid has spread further afield, infecting and radically shifting the ethos of teams across the continent. Clubs such as Bayern Munich, Paris Saint-Germain, Juventus, Barcelona, and Manchester City prize the Champions League above all else, the life-cycle of managers and coaches unduly influenced by the acquisition of a winners medal. In the cases of PSG and Manchester City this is perhaps unsurprising; with both clubs yet to claim club football’s ultimate prize their place among the top echelon of European football is the most tenuous, their place amongst the superclubs secured by Emirati riches rather than any pretensions of a grand and illustrious history. For a vast majority of the European elite though, emphasis on the Champions League is borne from the monopolization of domestic honors, the likes of which has never before been seen. With such an embarrassment of riches and paucity of competition, it is small wonder then that the Champions League has taken priority of place amongst the elite.

With this singular goal in mind, recruitment for such clubs can often resemble little more than an arms race. With such a concentration of talent shared amongst these sides, the question is not merely which superstar plays for your club, but which superstars. “Manchester United have signed Cristiano Ronaldo, Jadon Sancho, and Raphael Varane to play alongside Bruno Fernades.” “Bayern Munich have added Dayot Upemacano, continuing their practice of poaching talent from their domestic rivals.” “Chelsea have signed Romelu Lukaku because the striker they signed last year wasn’t good enough.” “Manchester City added Jack Grealish for £100m, but should they have spent £150m on Harry Kane as well?” “PSG signed Lionel Messi, Sergio Ramos, Achraf Hakimi, an F-17 fighter jet and 3 intercontinental ballistic missiles, but will it be enough?”

Amidst the avalanche of transfer activity this summer among Europe’s top clubs, Real Madrid seemed conspicuous by their absence. Granted, they were able to pick up David Alaba on a free transfer and paid Rennes £25m for one of the continent’s most exciting young talents in Eduardo Camavinga, but, most unusually for them, they seemed hesitant to wade into the chaos. To be sure, this dabbling in frugality is owed largely to the ravages of the pandemic, the effects of which have wreaked havoc on every club’s finances; decimating La Liga and in particular Barcelona. Nonetheless, Real’s relative inertia did seem strange, the usual buzz around the comings and goings at the Santiago Bernabéu replaced with an almost haunting quiet. Then, just as it seemed as though Los Blancos had allowed themselves to be overshadowed, a warning shot fired from the Spanish capital. Real Madrid had lodged a bid for Kylian Mbappé.  Florentino Pérez is a man who enjoys the spotlight. As curator of the world’s grandest footballing institution, one might think that this would be a prerequisite for the role of president, but Pérez luxuriates in it, never missing an opportunity to bask in the warm glow of his own self-reflection. His tenure as president, stretched over two separate reigns, has become synonymous with ego, efficaciousness, and staggering excess. Under his regime, Real Madrid have lifted themselves out of the relative slump they experienced in the latter half of the 20th century to a period of undeniable success. A record of 5 Champions Leagues, 5 La Liga titles, 4 European Super Cups and a host of other honors would qualify as a glittering period by anyone’s standards, even standards as lofty as Real Madrid, and surely have earned Pérez favorable comparisons to the legendary Santiago Bernabéu. However, while Pérez would surely feel that his name should be mentioned in the same breath as the man whose name is emblazoned above the stands in Madrid, his name will enduringly be synonymous with another; Galácticos.

As long as there have been football clubs there has been competition for elite footballers. In 1893, when Aston Villa paid £100 for the Scottish international Willie Groves, it would have been inconceivable that such excess could be flaunted in a sport that had its foundation in muscular Christian morality. Yet, as the fees for talent climbed ever higher over the coming century, aided of course by the Bosman in 1995, it became apparent that collecting not just talented players, but superstars, was the surefire way to prove the status of your club, if not necessarily a way to guarantee success. No man, save perhaps Roman Abramovich, has understood and weaponized this concept more than Florentino Pérez. Before Neymar and PSG broke football in 2017, Real Madrid under Pérez seemed more akin to MGM during the Golden Age of Hollywood; their immortal slogan, “more stars than there are in heaven”, having similar resonance at the Santiago Bernabéu. An exhaustive list of the stars of Florentino Pérez would be exhausting, and even to limit ourselves to the marquee names is to list a veritable who’s who of the world’s greatest footballers; Zinedine Zidane, David Beckham, Luis Figo, Roberto Carlos, Ronaldo, Garett Bale, Mesut Özil, Kaká, Ronaldo again.

It seemed only a matter of time therefore, before Kylian Mbappé would be subject to a bid from Florentino Pérez. Set to dominate the conversation around the world’s greatest footballer for the next decade, Mbappé always seemed destined to wear the white and gold of Real Madrid, to continue the legacy of great players that stretches back to Alfredo di Stéfano and Ferenc Puskás. It is preordained, as inescapable as death and taxes, if for no other reason than Florentino Pérez’ ego wills it, and that failure to secure a player who draws comparisons to Pelé would be anathema to Pérez’ conception of himself, and indeed, the club he fronts.

Kylian Mbappé is, indisputably, the ultimate expression of what a Real Madrid player should be. Supremely skillful, lightning fast and devastatingly clinical, Mbappé has long been perceived as football’s ultimate talent, the next guy up, the natural heir to the Ronaldo-Messi duopoly that has dominated world football for the better part of 15 years. As such, a move to the Spanish capital would be a natural evolution of his already glittering career, the final stepping stone on his path to greatness. The problem, however, is that an imminent move to Los Blancos really only benefits one party; Madrid. Real Madrid are in an unusual situation, or at least, what might be imagined as an unusual situation for Real Madrid. The swaggering team that won 4 Champions League titles in 5 years has all but vanished, the last vestiges of that imperious side entering the twilight years of their illustrious careers. While still a force to be reckoned with, this current iteration of Madrid is perhaps not the ideal launch pad for Kylian Mbappé. It of course goes without saying that Mbappé would improve Real Madrid, but the idea that his magnetism could overcome the serious deficiencies through the spine of this Madrid team is rather fanciful. Madrid have parted ways with arguably the most dominant centre back pairing of the late decade, suffer from an alarming gulf in age profile in central midfield, and have yet to see the best of the superstar forward that they already possess; Eden Hazard. Were Mbappé to insert himself into the maelstrom, one might worry that the sisyphean task of getting Madrid firing again might, at last, overcome him.

This is by no means to say that Mbappé is not more than capable of such a herculean task, but merely to state that such an undertaking seems  like an unnecessary risk. As currently situated, Paris-Saint Germain are ideally placed to capture their maiden Champions League trophy, alongside continuing their dominance of Ligue 1. The opportunity for Mbappé to play a leading solo in Mauricio Pochettino’s glamorous orchestra is surely one that is too good to pass up. Should Pochettino manage to harness Lionel Messi, Neymar, Di Maria, Marco Veratti, Achraf Hakimi and Sergio Ramos alongside Mbappé, what glorious music they could make. What conjurations and what mighty magic should even just Messi, Neymar and Mbappé create? It is a mouth-watering prospect, and one that surely should cause Mbappé to think again, if not merely for the example that a current teammate has given him.

When Neymar shattered the world transfer record by a simply mind-blowing margin, it was to move out from under the titanic shadow that Lionel Messi had cast during his time at Barcelona. Upon entering his 5th year at PSG, his harshest critics would consider his move ill-advised at best, as, for all his dazzling quality, he has been unable to carry PSG to the promised land. While harsh – the Champions league is a brutal competition that can be heavily contingent on the rub of the green – it nonetheless serves as a dire warning for those looking to burnish their reputations, rather than their trophy cabinet.

Perhaps fate will be kinder to  Mbappé than it has been to Neymar. Perhaps he is, to paraphrase one of his great predecessors at his next club, the final layer of gold paint on the Bentley. He will take his rightful place amongst the pantheon of great players who have worn the white and gold. We must only hope that it is not too soon.