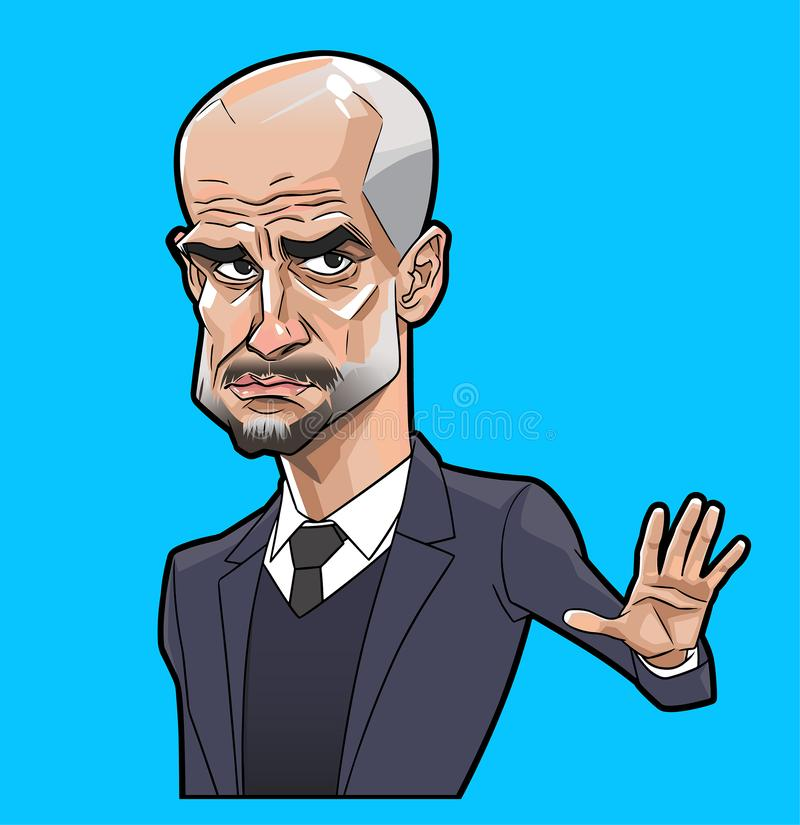 At the risk of sounding like the meditation app you currently subscribe to for $14.99 per month, I would like to invite you to close your eyes. Focus on your breathing, allowing yourself to relax into that steady rhythm of in and out. As you feel whatever tensions and worries you carry begin to melt away, an image starts to form in your mind’s eye. The outline of a man, finely groomed and immaculately tailored; resplendent in silk and Italian leather, his bald head gleaming in the glorious afternoon sunshine. What sensations do you feel, what images does this man conjure, what do you think about when you think about Pep Guardiola?

Do you think of the football revolutionary, the young genius who inspired countless pale imitations, unleashing the greatest player of his generation, in the greatest team of its generation, to devastate and mesmerise in equal measure? Do you think of the intricate passes, the outrageous possession statistics; “that carousel that can leave you dizzy,” the telepathic understanding between the holy trinity of Messi, Xavi and Iniesta? Do you think of the goals that seemed to be crafted by Michelangelo himself, the cashmere jumper for a chilly night, the relentless evangelising from fans of the Blaugrana that Barcelona was “more than just a club,” as though even had they not been winning so relentlessly, they would have been content to sit in a field, holding hands and singing kumbaya?

Do you think of the sabbatical, the exchanging of philosophies with Marcelo Bielsa over red wine, the emphatic return to management with Bayern Munich? Do you think of his elevation of Manuel Neuer to the best goalkeeper in the world, of Philip Lahm recreated in his own image, of Robert Lewandowski scoring 5 goals in 9 minutes?

Do you think of the three Bundesliga titles in a row, of the 75% win rate, of Xabi Alonso spreading passes to Frank Ribery and Arjen Robben on the wings? Do you think of the questions raised, gently at first, over his failure in the Champions League, of the 5-0 aggregate loss to Real Madrid, of the fact that for all the technical mastery of Guardiola’s Bayern Munich they failed to register a shot in a tie with Barcelona?

Do you think of his unveiling at Manchester City, of the beaming smile and scarf held aloft, of the tantalising promise of domestic and European domination?  Do you think of full-backs tucking inside, of costly defensive errors, of being ripped apart by Jamie Vardy and Leicester City on a torrential evening on Merseyside? Do you think about his triumphant second season, the breathtakingly beautiful football, the record goal tally, the record points total?

As currently situated, it is clear then that Pep Guardiola without question belongs in the upper echelons of the managerial pantheon, his place in footballing mythos bolstered further by a third Premier League title, and, at the risk of raising the ire of Chelsea fans, what should have been a third Champions League trophy. When we talk about Pep Guardiola we talk about this. We talk about the beautiful football, the genius who has defined how the game is played for a generation, the ceaseless, unrelenting commitment to winning. We talk in outraged tones about the money he has spent, ($500million on defensive players alone!), about his failure to win a Champions League title in 10 years, (10 years!), about whether he would have any success managing Brighton & Hove Albion on a shoestring budget, (let’s see him win the league by 20 points with a midfield of Yves Bissouma, Pascal Groß and Leandro Trossard!).We talk about his laissez-faire attitude to traditional managerial attire, his partiality to a bottle of full-bodied red, his exacting standards eventually taking their toll on both himself and his players.

This is the Pep Guardiola that we immortalise, the Pep Guardiola that we love, and the Pep Guardiola that we hate because he isn’t the manager of our football club. However, if reality is little more than perception, how we perceive Guardiola and his accomplishments has invariably been rose-tinted. Half-hearted criticisms that he has bought his success aside, scrutiny as to where the gold that has built the road to El Dorado comes from has very rarely, if indeed ever, fallen at his door. Now do not get me wrong, the cabal of billionaires that run elite football clubs are all, to put it politely, less than savoury individuals. As we have seen with the fiasco over the European Super League, the one thing that these immensely rich and powerful individuals can be relied upon to do is act terribly, and almost exclusively in their own interests. If this new bourgeois had spent years relentlessly and ruthlessly accumulating wealth and power at the expense of working people, did anyone seriously imagine that they would entertain the opinions of common fans?

While it would be overly harsh to criticise every top manager for taking extraordinary amounts of money from men with an extraordinary lack of scruples, not all billionaires are created equal. While it is a reasonable assumption that every member of the billionaire owners clubs have exploited people to some degree, it is unreasonable to assume that all of them have exploited people to the same degree. The state ownership of Manchester City may have done many wonderful things for the city of Manchester, this much is true, but they seem rather less concerned with enriching the lives of their own people. Flogging and stoning are legal punishments in Sharia courts, Homosexuality is a crime punishable by death and exploitation of migrant workers is common practice. The UAE has a long and miserable history with human rights abuses, which is devastating and catalogued by groups such as Amnesty International, but distressingly, they, along with other countries in the Middle-East are successfully rebranding themselves as champions of sport.

In June 2017 Pep Guardiola addressed his fellow Catalonians from the steps of Montjuic in Barcelona, declaming to the 40,000 strong crowd that “we have no other option but to vote.” Throwing his full voice behind the movement for Catalonian Independence, his fist held high and clenched above his head he invoked the spirit of revolutionaries and freedom fighters the world over, evoking cheers and raucous applause from his fellow countrymen. In the back of his mind, I wonder if he spared a thought for the political dissidents of the UAE, dissidents that his current employers have abducted and tortured. I wonder if he thought about the citizens that his employers have held without trial and have denied access to counsel, for daring to speak out against their government. I wonder if his hypocrisy left a bitter taste in his mouth, whether the 40 pieces of silver he has won for Manchester City have been enough to assuage his qualms over his monumental hypocrisy, whether the riches he has earned during his tenure with the Citizens provided a balm for the burning knowledge that he is free to protest and demonstrate in the interests of his people, but the citizens of the UAE are met with violent suppression by his employers for voicing their own political dissent. Perhaps he has reconciled it within himself, or perhaps he never suffered any internal dilemma over this contradiction, content, conceivably, that it is not his problem to solve.

It is, however, our problem to solve. When we talk about Pep Guardiola we immortalise him with our praise, praise for his beautiful football, for his bursting trophy cabinet, for his hilarious penchant for sticking two fingers up at the traditional managerial wardrobe, turning up to coach looking like the cool father who lets his daughter’s boyfriend stay the night. It’s understandable that this is how we categorise Guardiola, as it is far easier to talk about his genius as a tactician than having to grapple with the complex issues of global politics, and his place within them. However it is important, perhaps now more than it ever was, to contextualise Guardiola and others like him in terms of his position as the figurehead of a club run by an oppressive, totalitarian regime, to discuss his role as a puppet in the current era of sports washing, to realise that he is employed by people who would not tolerate him and his agenda if hewas their citizen. So by all means let’s talk about Pep Guardiola, but as we talk about his greatness, we must also talk about his hypocrisy.